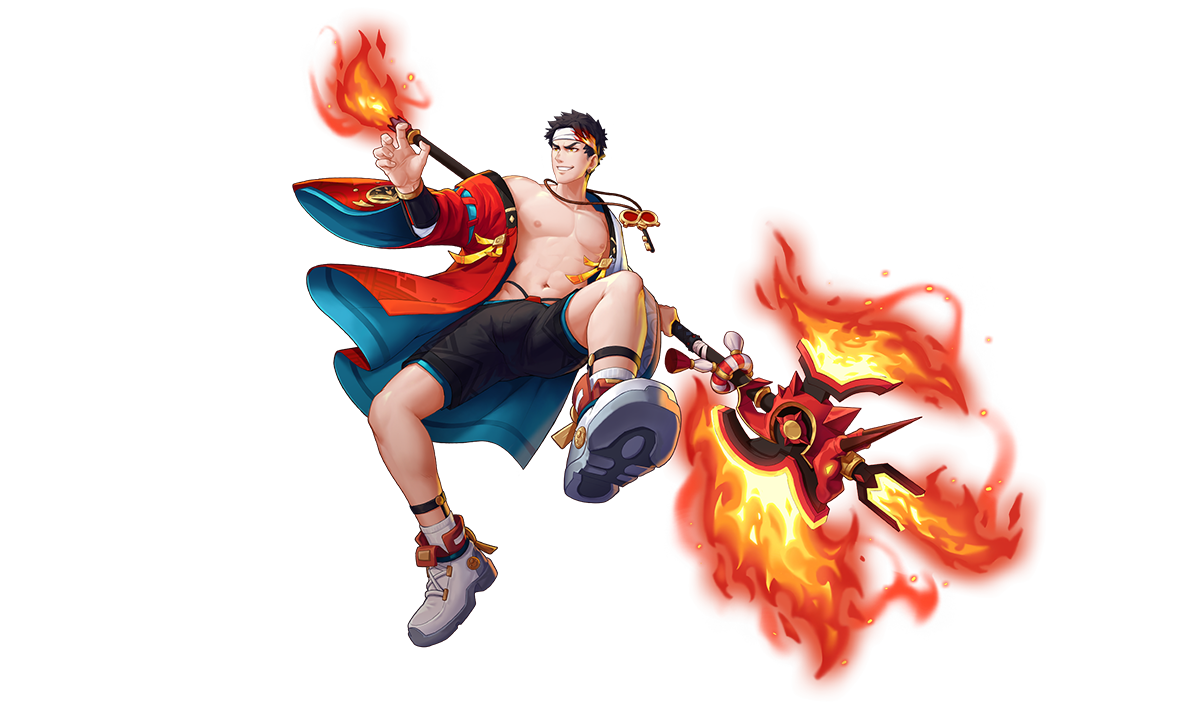 The older brother. Full of Passion.

Sven attacks 1 enemy with the spear, dealing physical damage equal to P.ATK *121% and gaining 1 stack of [Fire Spirit]. If the target's HP percentage is less than Sven's, gains 1 stack of [Fire Spirit] additionally.
[Fire Spirit]: While the effect is active, each stack increases the character's Effect Resistance by 15%, stacking up to 4 times. Lasts till the end of the battle.

Increases the damage of [Burst Spear] by 20%.

Kolkaz becomes a dragon and pray for Sven, inflicting [Sun Flame Morale] on him. If the number of enemies is less than or equal to your team's, gains 1 stack of [Fire Spirit].
[Sun Flame Morale]: While the effect is active, increases the character's damage by 16%. When Sven's HP is full, increases self damage by 17% additionally; the damage bonus will decrease as HP decreases. Lasts 2 rounds.
[Fire Spirit]: While the effect is active, each stack increases the character's Effect Resistance by 15%, stacking up to 4 times. Lasts till the end of the battle.

Sven sees himself as one of the most outstanding Shadowhunters in the world. His will is so firm that he possesses immunity to [Chaos] since the beginning of every battle, and this effect cannot be dispelled.
Increases Sven's skill damage by {0} (Fixed bonus {1}+ Mastery bonus {2}).
At the beginning of every battle, Sven gains [Scorching Blood].
[Scorching Blood]: [Blood Lock] status; While the effect is active, the character's HP will not become less than 45%. This effect conflicts with [Blood Lock] and [Ablaze] effects. Before the character takes action each round, if the character's HP is 45%, this effect and all the control effects on self will be removed automatically; after that, gains [Scorching Blood - Awaken].
[Scorching Blood - Awaken]While the effect is active, increases the character's Crit Rate, Effect Resistance and healing received significantly. When the character uses [Flowing Fire] or [Giant Flowing Fire], gains a stack of [Fire Spirit]. Lasts 3 rounds.

Sven and Grancy's father is the current Roderick. They are considered his successor and have been sent to the Shadowhunters for training since an early age.

Sven is passionate, kind and loyal, so he gets along with everyone quickly. He does not like his brother, but there's not much he can do.

In the organization, Sven passed the Shadowhunter trials after just six years and officially became a Shadowhunter.

His family is one of few that have been Shadowhunters for ages, and have signed a pact with the Draconians a long time ago. During the Coming of Age Ceremony, the family heir travels to the Cloudend Isles to pick a dragon partner. The Morgan family will then cast an arcane spell to give the dragon its transformation power, so it can fight alongside its master.

Sven's partner is called Kolkaz. They have similar temperaments, but still need to learn how to work together.

Now that he has signed the pact with his dragon, he must prepare for the successor election. This year's candidates are more talented than ever, so Sven and Grancy must be prepared to give everything. Who will be the next Roderick?;;Item_Badge_52,1