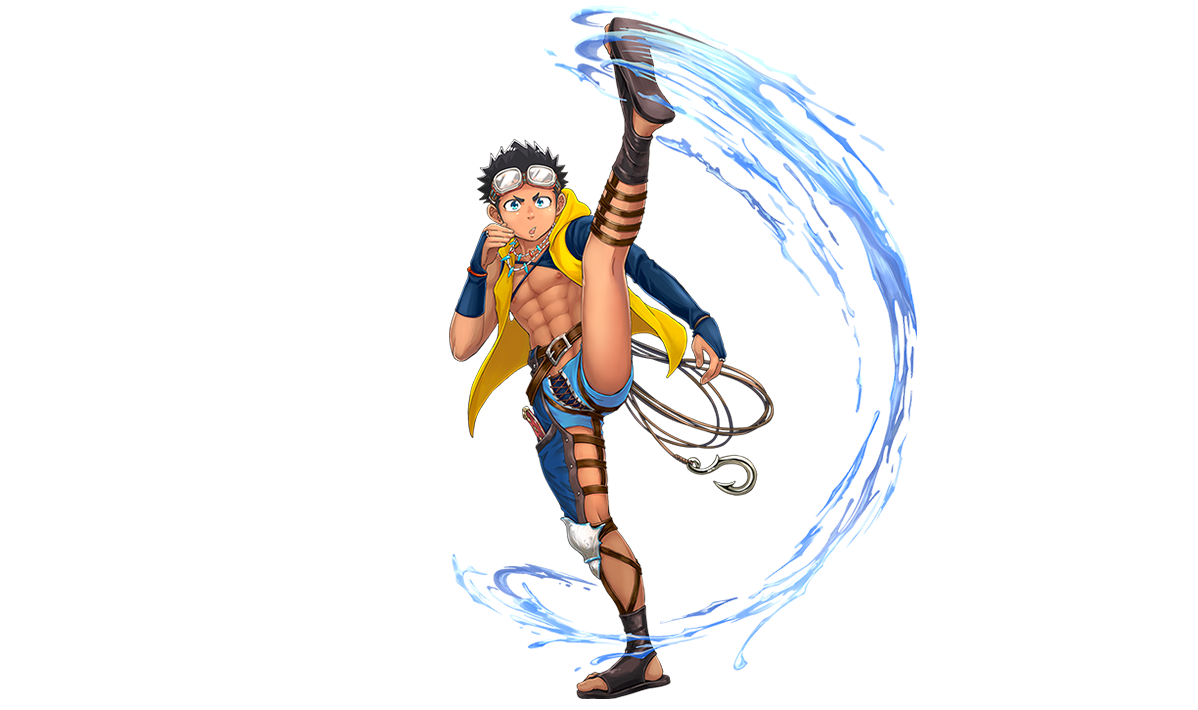 A clever youth who was born and raised in Elysiann.

Shirou jumps up and gathers steam to unleash a water blade horizontally, dealing damage equal to P.ATK*89% to 1 enemy.
When using this skill in [Dive], inflicts [Barnacles] on the target additionally;If the target already has [Barnacles], removes the [Barnacles] from it and inflicts [Chaos].
When the target's HP percentage is less than the user's, grants 1 Concentration.
[Barnacles]: When the effect is active, reduces Speed by 20%, lasting 2 rounds.
[Chaos]: When the effect is active, the character goes out of control and launches Normal Attack against any one random unit, including allies, lasting 1 round.

Shirou connects the earth and the water in the air and switches their attributes to hide in the water, inflicting [Dive] on self.
When using Hydrotherapy with more than 75% self HP, grants 1 Concentration additionally.
[Dive]: Type: Invisibility. When the effect is active, the character cannot be targeted.
When Shirou uses a skill in Dive, increase self damage by 28%, lasting 2 rounds.

[Water Blade]'s damage is increased by 18%

Shirou summons the power of the ocean to attack 1 enemy, dealing physical damage equal to P.ATK *314%.

When self HP is less than 30%, [Hydrotherapy] additionally restores HP equal to self ATK *75%.

[Hydrotherapy]'s damage is increased by 13%

Blessed by the ocean, Shirou's skill damage is increased by {0} (Fixed Bonus {1} + Mastery Bonus {2}).
When Shirou takes a Fatal Blow, automatically gains the effect [Dive]
(PS: This effect is available only once every battle).

Shirou was born into a normal Elysiann family. His innate talent for wielding Arcana led him to feel that he was different from others. Through his own observations and accumulation of knowledge, he came to the clear conclusion that he was a Gyee. After weighing the pros and cons, Shirou chose to hide his identity for the time being. However, he himself never tried to run away from the truth and he never resented the situation he was in as a Gyee. Instead, he decided to work hard to become more outstanding. Every day, he persists in his efforts to study history and philosophy, as well as practices his control of Flux and merging it with Arcana. To his mother and father, he is a reliable son. To his teachers, he is an extremely talented student. To Shirou, a boy who has gotten his life in order, there is only one individual he is helpless in the face of - his best friend Daley. When Shirou found out that Daley was a Gyee, Daley himself hadn't realized it yet. Taking into consideration Daley's sensitive nature, out of fear that he would suffer unjust treatment, Shirou decided to withhold the truth from him.