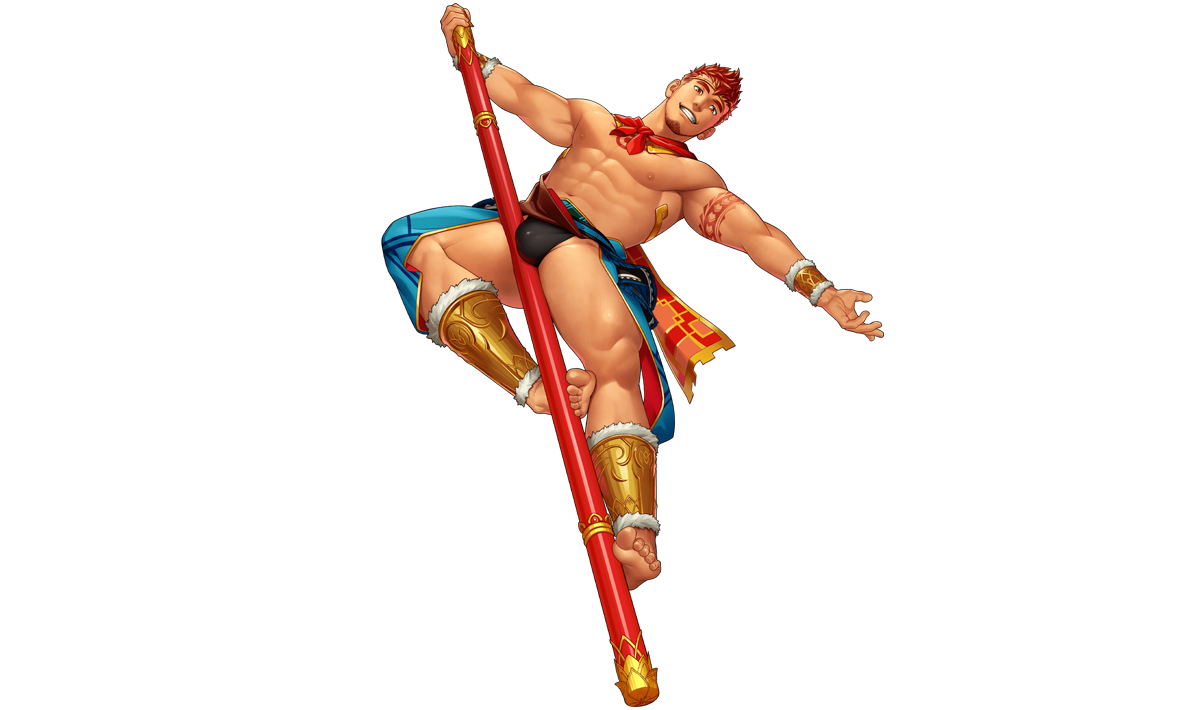 "Drown in my partners' weapons!" Kong summons his arsenal, dealing to 1 enemy P.DMG by P.ATK *86%, causing half splashing damage to enemies on both sides.

[Oppressed]: While the effect is active, the target cannot take action for 1 round.

I'm Getting Serious! : Increases Mirage Baton's damage by 20%.
Taste My Batons! : When hitting enemies with [Got Ya!], increases this skill's DMG by 30%.

Just the Beginning: When there are 3 or more enemies, grants 1 extra stack of [Dodge This!] and [Powerless on Me!] after using the skill.

You sure got a thing or two! : When self HP is lower than 70%, using Devastating Bash restores self 20 Mana.

"I'm Master Kong!" Any damage dealt by Kong increase {0} (Fixed Bonus {1} + Mastery Bonus {2}).
At the beginning of the battle, Kong is granted [My Stone Head!] [First Blood!] [No Escape!]
When there are 3 or more enemies, Kong applies on the enemy with the highest HP percentage [Got Ya].
[My Stone Head]: Grants immunity to [Deform] [Slumber]. The effect is lifted after being defeated and cannot be dispelled.
[First Blood!]: Grants [Attack First] for 1 round when the battle begins.
[No Escape!]: Self attack ignores Dodge.
[Got Ya]: The character's attack on Kong will be dodged. This effect can exist on one enemy only at a time and cannot be dispelled. Lasts 1 round.

During the Shadowhunter initiation ceremony, a rookie in northern tribal outfit and a staff walked onto the stage, grabbed the microphone from whoever was talking at the time, and proclaimed loudly,

"I'm Kong, and I swear I'm going to be a legend among the Shadowhunters!"

That's Kong in a nutshell for you.

26 years ago, the nomad tribe of the northern desert found Kong crying on top of a boulder. With no parents and no one to reply on, Boulder Boy, as he was called, was bullied by children around his age and ignored by adults. He managed to grow up in relatively good health, and actually became the tribe's main combat force due to his physique and talents. On the other hand, a restless Kong caused a lot of trouble because he didn't listen to anyone, and no one could best him. Eventually he was exiled after one last incident, and spent several years wandering the north.

Two years ago, the Shadowhunters found a wandering Kong while on assignment. They scouted him because of his agility and outstanding talents.