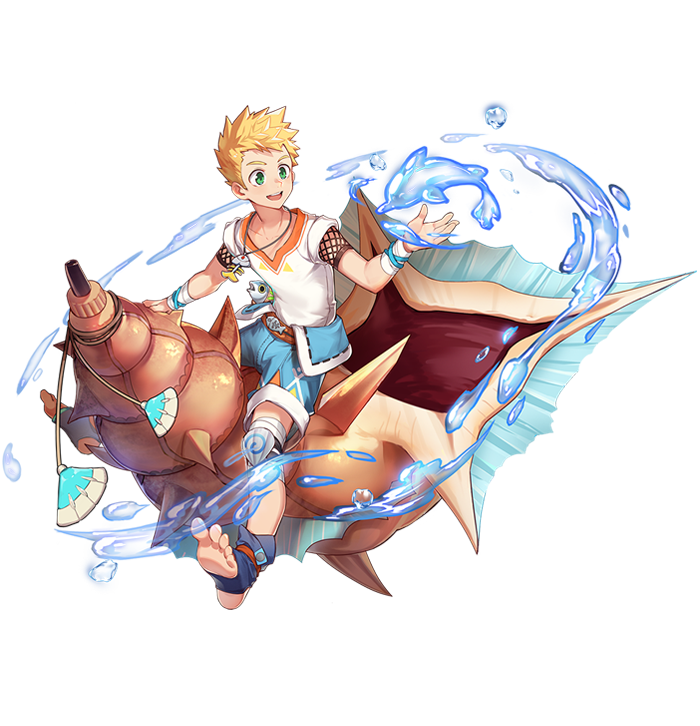 Daley summons a dolphin to charge at the enemies, dealing to all enemies M.DMG by M.ATK *91%, applying [Drowning] effect on the main target. This effect ignores Effect Resistance.
[Drowning]: While the effect is active, the character cannot use any Physical attack skills for 2 rounds.

Passive Effect
Increases [Tide Call]'s damage by 20%.
When using [Tide Call], applies [Slippery] effect on self.
[Slippery]: While the effect is active, the character cannot be targeted by melee attack, and reduces self damage taken by 75%, for 1 round.

Daley blows his sea shell to summon his friend Hayden, dealing to 1 enemy M.DMG by M.ATK *352%. Deals to adjacent enemies damage by 15% if self HP percentage is lower than the target's.

As a friend of the ocean, Daley's damage will be increased by {0} (Basis {1} + Mastery {2}). After Daley using 'Wetness' and 'Hayden's Coming', applies [Salted Fish Sashimi] effect on the target. After using 'Tide Call', applies [Sea Thorn] effect on the friendly unit with the lowest HP percentage.
[Salted Fish Sashimi]: While the effect is active, when the owner receives damage, this salted fish deals extra damage to the owner.
[Sea Thorn]: While the effect is active, the owner reflects melee damage by a proportion.

A son of an ordinary farmer's family in Elysiann, Daley grew up by the river of Elysiann and has been playing with fish since childhood. Daley was gifted with the power to control Water Flux, and he named the sea shell he uses as weapon, taking it as his 'sister in battle.' However, neither Daley himself nor his parents were aware of his Gyee identity. One day, Daley found a severely-injured youth named Shawn in the river. He entrusted his best friend, Shirou, to save Shawn's life. Despite Shirou's initial precaution of this mysterious youth, he reluctantly accepted Daley's request. Soon, thanks to Daley's enthusiasm, the three of them became very close friends.