“Explosive Damage from Flurries of Attacks,
Narrow Survival from Clashes of Weapons” 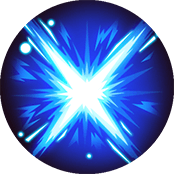 Passive Effect
Has a chance to recover 5 Rage when [Merciless] hits a target. 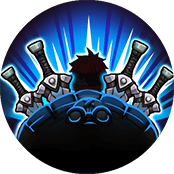 Passive Effect
When [Blood Thirst] hits a target, inflicting 2 stacks of [Slit] of the target.
Eachtarget affected by [Slit] and then hit by [Blood Thirst] grants you HP equal to 3% of the lost HP. 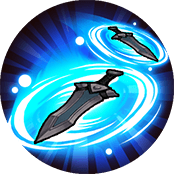 Musso throws the daggers out and leaps to 1 enemy to strike hard, dealing physical damage equal to PATK*396%. This skill consumes all the Rage and increases the damage dealt. 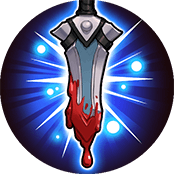 Each damage dealt by Musso inflict 1 [Slit] on the target hit.
[Slit]: Targets affected receive physical damage equal to PATK*9% (the damage increases as Mastery increases) before they make a move, lasting 2 turns, up to 3 stacks. When there is a target affected by the max stack of [Slit], Musso's damage increases by 10% for 2 turns.

When he was 14, Musso was sold to a wealthy merchant named Mullah from Wooddale as an indentured servant, simply because his father was disgusted that Musso was Gyee. Back then, he was scrawny and worked menial labor, barely getting by at lowest status. Three years later, Musso matured into a stunning young man and attracted Mullah's attention. The magnate promoted him to personal servant. They became inseparable, and for the first time in his life, Musso felt the bliss of being wanted.

But as Musso got older, Mullah's interest in him waned. A young man named Gagne was forced to come to the estate to work off debt and became Mullah's new pet. Completely ignored, a bitter Musso joined Mullah's caravan convoy, trained hard and grew strong in hopes of regaining Mullah's favor.

The opportunity came soon enough. During a hunt, a wild boar charged Mullah. Musso stopped the beast but paid the price of a nasty facial scar. He thought Mullah would be pleased and take him back, but the man decided to exile him to the blacksmith shop instead, citing he was now "too ugly for sight". When Musso begged to stay by Mullah's side, all he got was a beating, then expelled from the premises.

The event drastically changed Musso, driving him into the assassin trade, making his mark a hit man for anyone with a grievance--any grievance. He wouldn't instant-kill but slowly bleed a quarry to death, thus his "Blooddripper" moniker. He also vowed that when he is powerful enough, he'll return to "serve" Mullah.

(Click the Background File to get Image Shards in game when unlock new Gyees.)