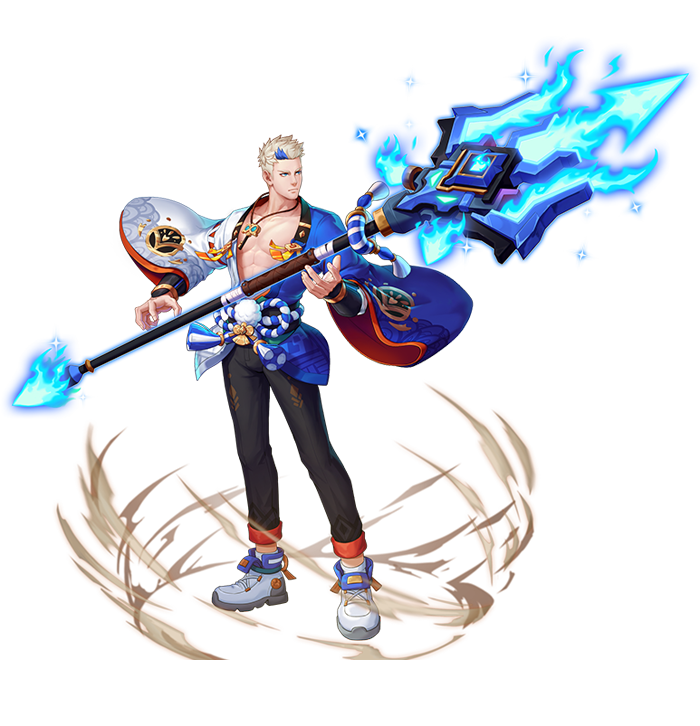 The younger brother. Calm and steady.

Grancy smashes his staff on the ground and throws an ice spear toward the enemy, dealing magical damage equal to M.ATK *82% to 1 enemy. When a target affected by [Freeze] or [Frost Bite] is hit, damage is increased additionally. When casting with [Chill - Awaken], applies [Icy Zone] effect on the target, and then removes [Chill - Awaken].
[Icy Zone]: While the effect is active, the character cannot act and is immune to damage, granting [Frost Bite] to all allies, lasting 2 rounds.

Grancy throws a ray of frost in the air and freezes the target, dealing magical damage equal to M.ATK *371% to 1 enemy. When a target affected by [Freeze] or [Frost Bite] is hit, damage is increased additionally. When casting with [Chill - Awaken], applies secondary damage on the target, and then removes [Chill - Awaken].

Grancy's frost magic can dispel dusts and gains immunity to [Cover] effect when battle starts. Cannot be dispelled.
Grancy's skill damage increases by {0} (Fixed Bonus {1}+ Mastery Bonus {2}).
When battle starts, Grancy gains [Chill] effect.
[Chill]: [Blood Lock] status; While the effect is active, the character's HP will not be lower than 35%. This effect conflicts with [Blood Lock] and [Ablaze] effects. When HP is 35% after the character acts, this effect automatically removes and gains [Chill - Awaken].
[Chill - Awaken]: While the effect is active, the character gains [Attack First], restores 100 Mana, increases speed significantly, enhances the next skill and automatically removes after casting the skill.

Sven and Grancy's father is the current Roderick. They are considered his successor and have been sent to the Shadowhunters for training since an early age. Grancy looks mature and well-behaved, but he has a wicked tongue.

In the organization, Grancy passed the Shadowhunter trials after just six years and officially became a Shadowhunter.

His family is one of few that have been Shadowhunters for ages, and have signed a pact with the Draconians a long time ago. During the Coming of Age Ceremony, the family heir travels to the Cloudend Isles to pick a dragon partner. The Morgan family will then cast an arcane spell to give the dragon its transformation power, so it can fight alongside its master.

Grancy's partner is called Radon. They have similar temperaments and have impeccable teamwork.

Now that he has signed the pact with his dragon, he must prepare for the successor election. This year's candidates are more talented than ever, so Sven and Grancy must be prepared to give everything. Who will be the next Roderick?