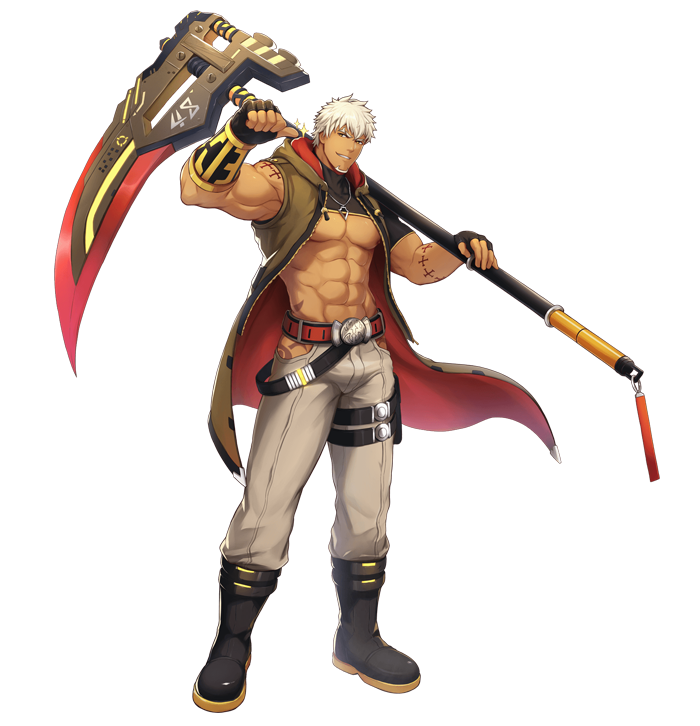 Freelancer.Searching the world for 'the thrill' that excites him.

Creed boosts himself with his own performance-enhancing mixture, dealing damage equal to 20% of his current HP to himself, but gains Enhanced Hormones and 2 stacks of Enhanced Physique.

Enhanced Hormones: While active, increases damage dealt by 11% for 2 rounds, cannot be dispelled.

Enhanced Physique: While active, removes 1 stack and restores 10% of max HP before taking any damage. Lasts 1 round. When this effect is removed naturally, he gains Enhanced Strength.

Enhanced Strength: While active, all damage dealt becomes critical for 1 round. Cannot be dispelled.


Increases the Hit Recovery effect of Enhanced Physique by 15%.

No tolerance for stupidity! Creed flings Fool Reaper, exposing the enemy's spirit and destroying it. Deals damage equal to 407% of P.ATK to 1 enemy. Increases damage by 20% for every enemy already dead, and deals an additional 10% damage when there is only 1 enemy left (up to 400% of his P.ATK).

Recycling: Increases the Lifesteal effect of Reaping Fools by 30%.

Fear: While the effect is active, the target is unable to use any skills against the caster for 1 round. Can be purified.

Creed has superhuman intelligence, increasing his overall damage dealt by Mastery. At the beginning of the battle, he gains No Sleep, making him immune to Sleep and Paralysis. Also places Flux Circulation on all enemies. When his HP is below 50%, he gains Adrenaline Rush.

Flux Circulation: Restores 3 Mana after taking action. Lasts 15 rounds, cannot be dispelled, and removed on death. When someone with this buff dies, Creed restores 20 Mana.

Adrenaline Rush: Increases Crit damage by 15%. If he dies while this is active, then places Misdirected Flux on all enemies. Lasts 5 rounds, cannot be dispelled.

Misdirected Flux: Increases damage taken by 10% until the end of the battle. Can be dispelled.

If you could only use one word to describe Creed, you couldn't do better than 'genius.' When Creed was young, he passed Luxium's most difficult IQ test with a perfect score. In fact, his IQ score was beyond measure. Once he grew up, he became active in all of Luxium's academic fields, and his name can be found in all their journals. His research is always sure to cause a stir, no matter which field it's in. Although he's made outstanding contributions to such varied doctrines as Arcana, machinery, astronomy, and medicine, he has never invested more than six months of his time into any one of them. And once he's done with one, he moves onto the next, invariably causing a sensation there, as well.

Creed carries a scythe upon his back. His sturdy muscles and intimidating tattoos give people the impression that he's a mercenary from BlackFlame City, while his distinctive white hair, charming face, and handsome smile give them the impression that he's some kind of star. In truth, he's been both a mercenary and a star. When he announced that he was leaving the world of entertainment, it sent shockwaves through the business. When asked why he was leaving, he gave the same answer that he'd given when he'd quit other fields.

'I want to find something new. Something...fun~'

Though sought after by the academic world, the entertainment industry, and even the black market, Creed is reportedly difficult to get along with. He never refers to the people he works with by their names, and there are even rumors that he threatens them with his scythe. When confronted with these rumors, Creed neither denied nor confirmed them, simply saying with a sly smile:

'Don't worry. My scythe drinks only the blood of fools...'

Even when negative rumors abound, when the star shines bright enough, their flaws naturally disappear.

Now, Creed is a freelancer making his way around Luxium, searching for something fun……