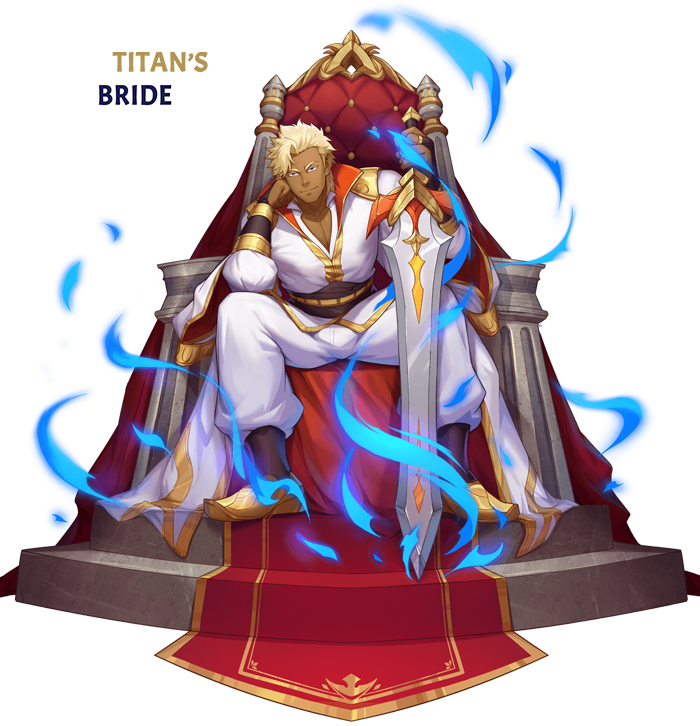 The prince of Tildant, the kingdom of Titans.He came from another world.

[Taunt]: While the effect is active, the character goes out of control and launches normal attack against the caster automatically when they acts, lasting 2 rounds.

[King's Contempt]: While the effect is active, 1 random active skill of the character's will be sealed for 1 round. Cannot be purified.

Caius gathers the Power of Tildant and releases it through his sword to attack all enemies, dealing true DMG equal to target's current HP *20% (down to Caius's P.ATK *200% and up to Caius's P.ATK *700%). Inflicts a [Mana Barrier] on other allies. If Caius's HP is lower than 35% when the skill is cast, doubles his current HP (10% of his Max HP at least).

[Mana Barrier]: While the effect is active, reduces the character's M.DMG taken by 25%. Lasts 2 rounds and can be dispelled.


Protection of Prosperity: Increases the M.DMG Reduction effect of [Mana Barrier] by 15% (increased from 33% to 38% when the skill reaches max level).
Mana Research: Reduces Power of Tildant's Mana cost by 10.
Mana Abundance: [Mana Barrier] additionally reduces DMG taken by 25% and grants Taunt immunity while it is active.

With the Titan's blood, Caius reduces DMG taken by 20%. His knowledge about Mana has brought him strong resistance to Arcana, reducing M.DMG taken.
When Caius takes DMG, gains 1 stack of [Tildant Mark]; after taking action, gains 2 stacks of [Tildant Mark]. When Caius has 5or more stacks of [Tildant Mark], the next normal attack consumes all the stacks and reduces all active skills' CD by 1 round. Every 1 stack consumed restores 3 Mana. Once resurrected, Caius cannot gain any more [Tildant Mark].
[Tildant Mark]: While the effect is active, each stack reduces P.DMG taken by 3%. When the character has 5 or more stacks of marks, gains control immunity. Lasts until the end of the battle or the character dies. Cannot be dispelled.

Manner of the Prince, Power of Prosperity

Caius came from another world named Eustil, where he was the first prince of Tildant, a kingdom of Titans.

In Tildant, he was supposed to marry someone and inherit the throne, but an oracle changed his fate completely. 'Disaster will befall Tildant If Prince Caius were to marry anyone of this world.'

Even though his engagement was thus broken off and he lost the qualification for the throne, he didn't just give up. Through continuous researches, he mastered the lost summoning spell and summoned Mizuki Koichi from Earth as his bride. After a lot of ups and downs, the two of them fell in love, and Koichi decided to stay and marry Caius.

After they got married, they went on a honeymoon to every country. When they passed by the Longears' kingdom, they heard of a treasure that allowed the user to travel through dimensions. Out of curiosity, they found the treasure and studied it. Unexpectedly, an accident happened and teleported them to Luxium...

After the teleportation, Caius saw all kinds of kobolds and thought they were teleported to the Beast Kingdom. Highly alert, he took a long sword to protect Koichi...